← Ants in the Pants
Daimyo Dash →

If I were forced to list three things that I have a history of disliking about board games, I would arbitrarily choose the following: Firstly, “pure” deck-building games, because the era of the hybrid is upon us. Secondly, cooperative games. And thirdly, fixed market pools in deck-building games, as opposed to the “river”-style markets of games like Ascension. Give me some variety! Some uncertainty! Some drama!

Aeon’s End, designed by Kevin Riley and published by Action Phase and Indie Boards & Cards, is a cooperative deck-building game with a fixed market pool. If I were a keeping-track man, that would make three strikes, and if I understand baseball correctly that means it’s time to pick up another chili dog and head to the car before the second inning starts. Fortunately, I’ve never counted past two in my life, because Aeon’s End has quickly become my latest obsession. 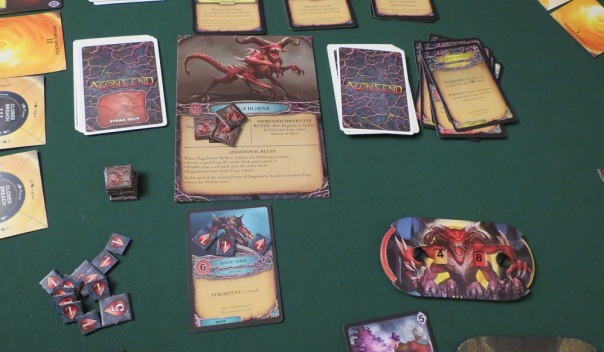 Well. At least he looks happy.

Stop me if you’ve heard this before. There are these big monsters, huge rampaging beasts, and they’ve driven humanity to the very brink of extinction. Fortunately, a band of plucky—

Oh, stop there? Fine. I won’t finish that sentence. And no, I wasn’t going to say heroes. I was going to say champions.

The reason it took me so long to finally open all those shrink-wrapped decks and give Aeon’s End a try was that it just seemed so, well, pedestrian. It might as well have had “dungeon” somewhere in the title. Dungeon’s End.

To my great surprise, other than that ho-hum getup, there isn’t a single pedestrian thing about Aeon’s End. Sure, its face might appear fairly bland at first glance, despite some nice illustrations. As a squidilly of breach mages — this world’s synonym for “heroes” — it’s your job to assemble the best spells and artifacts to vanquish those rampaging beasts, all while defending Gravehold, your final settlement. So you’ll buy gems, cash them in for better gems and spells and all the other goodies on display in the market, maybe thin out your deck as it gets plump around the middle, and eventually shoot off some pyrotechnics. The usual three-act structure of most deck-builders is present and accounted for: improve your purchasing power, winnow your deck, bounce your powerful cards off of one another for the win.

But let’s look at those monsters, since they’re one of the best things about the entire game. Rather than pestering you with the usual shambling fare, Aeon’s End is all about boss fights. And what boss fights they are, with each of the original box’s monsters behaving in original and exciting ways, each presenting their own challenge to overcome. There’s the Rageborn, a hulking demon who’s all about hitting your breach mages hard and fast, immediately putting you on your back foot as you scramble to heal or mitigate damage. The Carapace Queen is the horde monster, chucking so many one-hit husks in your direction that you’re quickly forced to make some serious decisions about whether to kill off the little buggers before they overwhelm Gravehold or shoot the occasional fireball at the boss herself. Meanwhile, the Prince of Gluttons chews through your market decks like meaty candy, while the Crooked Mask shuffles your deck.

Wait, he shuffles your deck? Is that supposed to scare you?

Well, yes, and it’s one of the many ways that Aeon’s End reveals just how clever it is. The very nature of deck-building games has always been largely reactive, giving you a hand of cards and asking you to make the best of what you’ve got. Basically, you can plan your deck composition but not your individual turns. In Aeon’s End, however, rather than restricting your ability to chart out a short-term path, drawing from an empty deck means you just pick up your discard pile, flip it over, and there you go. It’s a trick we’ve seen before, notably in Ryan Laukat’s City of Iron, and it does wonders for how much you can accomplish when you’re careful about the tempo of your discards. If you space out your currency cards and attack cards properly, there’s never such a thing as a dead turn.

Making him a double-jerk, the Crooked Mask also dumps worthless cards into your deck while he’s shuffling it. So there’s that.

The heroes of Aeon’s End are diverse, powerful, and oh so cool.

The other place this emphasis on long-term strategizing comes into play is through the breaches, they of “breach mage” fame. See, where most games treat magic as a simple process, a cost to be paid in exchange for some immediate benefit, the spells in Aeon’s End are frustratingly slow to employ. Each character comes with four breaches, one open and the remainder closed, and it’s only into these that spells can be prepared. Once prepped, they must be kept ready until your next turn, at which point they can finally be fired off.

In addition to being one more thing you’re forced to tend — closed breaches must be slowly focused, then permanently opened — they also offer a whole lot of depth to the game as a whole. For one thing, dealing damage to enemies means planning ahead, collaborating with your allies, and sometimes using artifacts or special abilities to set them off early. Far worse, some monsters are able to interrupt prepped spells, so getting a salvo in place is only half of the challenge. It’s the equivalent of assembling a firearm; the aiming and the squeezing of the trigger come later.

The other thing to keep in mind is your character’s special ability. Without exception, these are utterly awesome, bestowing considerable bonuses like cancelling a monster card entirely or repairing Gravehold. Of course, packing such a hefty punch means they don’t get to fire off all that often, instead charging up over multiple turns by dribs and drabs. On the one hand, it’s unlikely that you’ll get to use your mage’s particular ability more than a couple times in a single game; on the other, gradually building up the required charges makes for a wonderful place to dump the occasional wayward gem. Just one more thing to plan in a game full of them.

With so many things to consider, it’s no surprise that Aeon’s End is paced somewhat deliberately, especially when you’ve got three or four players mulling over their combined options. The nature of the initiative system can further frustrate this, with player cards mixed in alongside nemesis cards and drawn at random, something we recently saw in Fantasy Flight’s DOOM. This injects some wonderful and much-needed uncertainty into the proceedings. Flipping the next initiative card is an exercise in dread, everyone straining to see whether it will provide opportunity or disaster. Best of all, it forces everyone at the table to build some fireproofing into their plans. When you can’t count on the next turn being “safe,” or even that you’ll get a turn for a good long while — or crud, maybe you’ll get two turns in a row for all you know — you’ll quickly plan to not rely too much on any one spell or trinket.

Another day, another world-devouring monster.

That said, a slower pace is a small price to pay for gameplay this slick. All in all, Aeon’s End is perhaps the biggest surprise of the past few months. What appeared at first glance like Just Another Deck-Builder has revealed itself to be one of the finest and cleverest cooperative games I’ve played. Its monsters are as tough as they are varied, while its breaches, spells, and overall resource system provide a solid half-dozen things to consider with each new hand. It consistently tosses you into tough spots, balancing you between a crumbling Gravehold, wounded breach mages, and a nemesis whose health just won’t seem to chip away. And then by some trick of clever card play, you’ll figure out how to slide between all of them and stay alive for just a little longer. Maybe. Hopefully.

Aeon’s End is wonderful. Even its downsides can’t keep me away.

Posted on February 1, 2017, in Board Game and tagged Action Phase Games, Aeon's End, Board Games, Indie Boards & Cards, The Fruits of Kickstarter. Bookmark the permalink. 14 Comments.

← Ants in the Pants
Daimyo Dash →