← A Thousand Pages, Give or Take a Few
The V-Pandemic →

Watching something you aren’t supposed to is almost a rite of passage for a young person. Whatever the film, there’s an adolescent thrill in viewing the forbidden. For my schoolyard friends, it was Alien and Predator, which they recounted scene by scene for my jealous ears. For me, it was Timecop, an old VHS cassette pulled down from the shelf because my dad had talked up this one scene where Jean-Claude Van Damme did the splits over a pool of electrified water. Instead, I got an eyeful of him doing the splits over Ferris Bueller’s old girlfriend. So that’s how it is in their family.

And that’s what Ferox is all about. Mimicking the Italian cannibal exploitation genre that was so bizarrely prominent in the ’70s and ’80s, it arrives in a shoddy cardboard box, sports a “Be Kind, Please Rewind” sticker, and overfloweth with gory images of grisly massacres, angry twentysomethings embracing the horrors of desperate survival, and lots and lots of skulls and blood spatters. Just opening it, a part of me reflexively checked over my shoulder to make sure my parents hadn’t come home early from the symphony. 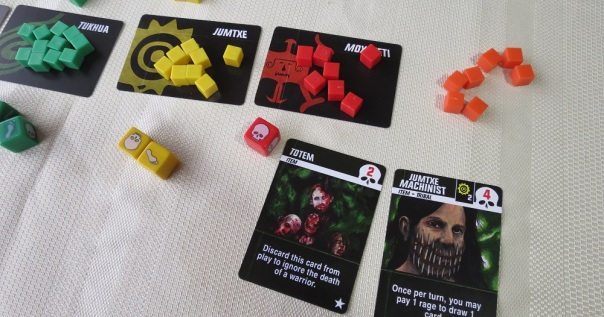 “Well, I’m just so happy we stumbled upon this totem.”

In Ferox (or “fierce,” as my basic education in Latin requires me to point out), a documentary crew has crash-landed in the jungles of an undeveloped island. Now they’re fighting their way to the pickup point, murdering all the natives in their path. The natives respond by trying to eat them. Violence ensues. “Who’s the real cannibal,” et cetera.

Before anything else, let’s get this out of the way: Ferox is going to prove a little bit sickening for some. For one thing, some of its illustrations are replicated straight from its source material, including one disturbing image that got the director of Cannibal Holocaust tried in court for making snuff films until he could bring the actors in to prove they hadn’t been murdered during filming. Nobody’s going to claim that Ferox isn’t true to its muse.

For another thing — and perhaps more offensive for some — it features lots and lots and lots of dice. As the film crew player, your hapless dunderheads will carefully position themselves to fight their way to the evacuation chopper, only to slip and fall on their faces, injuring themselves in the process. As the natives, determined to snack on the most civilized meal of all time (the “other other white meat”), you’ll regularly watch as half your warriors go scurrying into the brush, cowards that they are. The dice used by both sides of the fight are capricious in the extreme, offering both the opportunity to nettle at your opponent and the possibility of undermining your own plans.

What this does, however, is craft a narrative where anything can go wrong at any time. You might have a whole army of natives standing in the film crew’s path, goaded on by a Moxweti Warlord and armed with blowguns, and still deliver little more than a scratch. Or you might equip your sociopathic documentarians with machetes and stolen shields and still go round after round without getting up the gumption to use them. Each and every roll got my heart pounding precisely because the odds never once felt in my favor.

Maybe it’s just a tiny bit their fault they got into trouble while hanging out with friends like these.

It’s impressive that Ferox manages to make both sides feel constantly outgunned. As the film crew, you might be facing seemingly endless numbers of savages, but at least each of your people are veritable action heroes, shrugging off a javelin through the leg like it was a mosquito bite. As the cannibals, you might watch as warrior after warrior is felled, but hey, there are more where they came from. The pace hardly lets up for an instant. It’s almost a relief when one player has to take a moment to figure out his move, though that’s hardly any comfort because it usually means he’s holding a whole bunch of nasty things to spring on you.

It also helps that the mechanics themselves hold up surprisingly well. Rather than coast on aesthetics alone, Ferox is actually a pretty damn solid game. First up is the card system. The conflict between the film crew and the natives is divided into multiple encounters, each lasting anywhere from a few minutes to a full-blown half of the game. At the beginning of each of these encounters, both sides get to draft a couple new cards into their deck, representing your faction’s mounting desperation and savagery. You’ll fashion flamethrowers from cans of hairspray, learn to grovel in the dirt to prevent your enemy from regarding you as a threat, use smoke to flush out a hiding camera man, or terrify your enemy in order to sap their rage.

The Jumtxe do not understand this concept of a “prisoner exchange.”

Rage. Let’s talk about that.

In Ferox, there are no resources, at least not in the conventional sense of the word. Instead, both the film crew and the natives share a single pool of orange cubes called rage, passed back and forth as they perform actions. For example, you might bide your time for a while, watching as the natives gradually spend their energy — a small skirmish here, a frightening totem there — until, with most of the rage now pent-up on your side of the table, your opponent won’t be able to act, at least not very easily. Instead, it’ll be your people who are seething, chomping at the bit to be set loose. So you plan your cards right, time it so that the enemy doesn’t have enough rage to protect themselves, then unleash a massive attack. Or maybe you’ll wait too long and your rage starts trickling back to your enemy. Perhaps they play a card to steal it. As I said before, anything can go wrong at any time.

This system is the heart of Ferox, torn free of its host’s chest but still beating merrily along to the sound of a hundred pounding war drums. There are so many little ways to take advantage of it. Should you spend a bunch on a nice card now, or wait until your opponent probably can’t spend what you’ve given him on a big ambush? Should you try to leech it onto your side by being patient, or give it all to your opponent at a time when they won’t particularly benefit from it? Can you even afford to wait? In one fight, I had an elder who would steal rage from my opponent every time one of my warriors was killed in battle. This benefited me for a while, making it difficult for my opponent to launch big attacks without losing out on a whole bunch of stored rage. So instead of constantly adding fuel to the fire that was sucking the oxygen out of the room, he waited until he had hardly anything left and spent it all on a huge assault. With nothing left in my opponent’s pool, my pricey elder was worthless.

Best of all, the constant, even oppressive sense of tension that defines every game of Ferox is only heightened by this trio of systems. The raging tug-of-war between players, the unique decks that slowly take shape over the course of each game, and those faithless dice that will bring your plans crashing down around your head all serve to reinforce your fears that you’re always on the back foot, always cowering in terror, always glancing at your opponent’s hand because something terrible is coiled within, waiting to spring out at you. This is a game where terrible things happen left and right, and all of them, somehow, to you — no matter which side you’re controlling.

I’ll put it another way. If anyone’s getting to that helicopter, it will be minus a couple of friends. If your tribe succeeds at expelling these invaders, it’s only at a terrible cost. And everything on display in Ferox, from the shabby box to the bloodthirsty gameplay, is here to underscore that point with a line of red.

Posted on March 15, 2016, in Board Game and tagged Board Games, Craft Fair Games, Ferox. Bookmark the permalink. 8 Comments.

← A Thousand Pages, Give or Take a Few
The V-Pandemic →

Leave a Reply to Jar Jar is Dead Cancel reply