← There’s Gold in Them Thar Hills
Lords of Waterdice →

With a title like Moongha Invaders: Mad Scientists and Atomic Monsters Attack the Earth!, you know what you’re going to get. At least in general. You won’t be managing any trains, that’s for certain.

The Earth’s a goner.

The problem with Moongha Invaders is that it’s one of the most delightfully silly games I’ve played where the strategy and tempo aren’t forced into the rear seat by its goofball antics — and yet, in its current incarnation, I can’t bring myself to recommend it. Which has become an all-too-common occurrence from designer Martin Wallace, whose more recent designs have been equal parts bonkers-good and bonkers-what-were-you-thinking? In this case, I’d prefer to end on a high note, so let’s talk about what holds it back before getting to the good stuff.

Okay, so this is the second edition of Moongha Invaders. The first, originally appearing way back in 2010 (making it middle aged in board game years, silver hairs and potbelly and all), was a homebrew-looking thing, with only a few hundred copies in existence. One successful Kickstarter campaign later, the new edition exploded onto the scene… as a big colorful gooey blob.

I’ve seen a couple people ask what we critics mean when we call a game “overproduced,” and here’s a prime example. Gone are the utilitarian wooden tokens of the original edition, replaced by pricier plastic molds. In theory, these add a dash of nutmeg to an already-flavorful batch of eggnog; in practice, they add weight and cost while representing a huge step down in terms of usability. Not only are they as tacky as having a few too many drinks during your significant other’s long-awaited reunion with his or her birth parents, but the plastic isn’t even of high enough quality to justify how badly they transform the board into an unreadable oil spill of garish colors. My childhood army men were molded of finer (and firmer) stuff than this. Here, the Moonghas wobble every which way, loom far too large over their respective spaces on the board, topple onto their backs like overturned tortoises, and even resist the hot-to-cold water trick for straightening out bent pieces.

The fact is, a game’s bits matter. Of course they do — it’s why buyers flock to support certain Kickstarters, or play miniatures games, or, hell, why unboxing videos exist. This is a tactile hobby, after all. Components matter, and for Moongha Invaders the blobby components diminish the whole, resulting in an ugly, unreadable swamp rather than accentuating the coolness of all these monsters converging on our doomed planet.

Alright. Let’s talk about why this is such a pity, because Moongha Invaders — the game — is pretty damn rad. 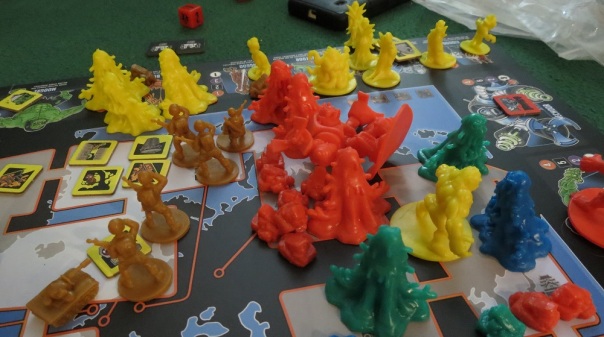 The big plastic pieces tend towards clutter rather than clarity.

In Moongha Invaders, you are not the Moongha Invaders. You are a disgruntled scientist who has been mocked one time too many, and is therefore creating the Moongha Invaders to smash the Earth and extract respect from these insects who robbed your tenure and your reputation. As such, the first few rounds are unexpectedly subtle, more of an infiltration than outright invasion. There are tokens available at the bottom of the board, partially randomized each round, and by claiming them, you may slowly assemble and supercharge your forces. Take an orange token, for instance, and you can begin to engineer a Moongha; accumulate enough and your Moongha will appear on the board. Awesomely, rather than make their appearance publicly, they start out hidden, making them unassailable by authorities or other monsters until revealed.

Other colors provide a variety of opportunities. White tokens can be spent on an attack, or — and this is really neat — hoarded atop your monster in preparation for a larger-scale assault later on. Purple tokens let your monsters slither between countries or go back into hiding. And then there are neutral units, the mad scientist version of “swatting” your competition. Send a hero to a den of hidden monsters to potentially reveal them, deploy infantry and tanks and jets to shoot at hordes of Moongha, or drop the rare H-bomb to decimate everything in a city (including the city itself), hidden or not.

It almost goes without saying that placing rubble markers in cities is the main way of earning points. Destroy far and wide and you’ll go down in history as the worst thing that ever happened to humanity. Even so, each scientist is secretly interested in protecting two particular cities, perhaps where your high-school crush now lives or something. These are picked at random at the outset of each game, and give you an extra reason to muck up your opponents’ plans.

What gives Moongha Invaders the breath of life is that there’s this enthralling tension between the revealed and the hidden. Once out in the open, monsters are forces to be reckoned with, smashing cities and wrecking armies and slaying other monsters with wild abandon. Much of the time, however, they’re functionally invisible, forcing players to gradually escalate their investment across various cities before everything comes unhinged. Reveal your huge Mechoor too soon and you might find it gunned down by tanks and jets before it can do much damage to Cairo. Protect Moscow too zealously with piles of neutral troops and the other mad scientists may deduce that it’s one of the cities under your protection, therefore taking particular interest in reducing it to ashes. Hide too many monsters in Rio, and risk getting nuked.

Beyond that, there’s something irresistibly cool about how different each type of Moongha is. The only one without a special trait is the Mechoor, your biggest and baddest monster, and that’s only because he’s so big and so bad that he doesn’t need any tinsel strung from his arm-cannons. The other primary city-wrecker is the Bloob, which become cheaper to engineer as you spread them into adjacent spaces, at which point they act as a single unit that spans multiple cities and attacks everywhere at once. The Kiddoo is a sidekick who helps with any attack he’s involved with, the Spectoor is a mastermind who doubles the effect of those move/hide tokens, and Shaggoos can attack hidden monsters. The last two can even earn some extra points on the side. The Drakoor is basically a vampire, just wanting to sleep until the world ends, while the Moogre can wipe out enemy monsters for points. Eradicating a coven of Drakoors or using your Moogre to bring down an enemy Mechoor make for hilarious little side-tales to the story of how the world ended. 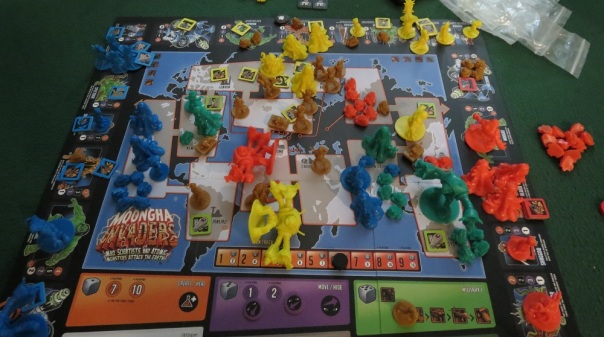 Best of all, between so many varieties of monsters, the need to both protect and raze cities, many ways to earn points, and the constant tug-of-war between keeping your monsters hidden and sending them screaming into view, Moongha Invaders makes for a riveting evening. Battles will be fought, skyscraper-sized creatures will be felled, heroes will uncover the concealed, and Earth will receive its due. It’s undoubtedly a weird game, not the sort of thing you see every day, but I tend to think that’s what makes it so special. There aren’t many games that let you nuke a city just because you think it’s under the protection of a rival mad scientist, or conceal a sleeping vampire in a smouldering New York City, or send a non-copyright-infringing Hulk to crush a non-copyright-infringing Mechagodzilla before it can slip back into hiding.

If you can get your hands on the original edition, or if you can get past the second edition’s Skittles-commercial appearance, of if, somehow, it just doesn’t bother you, then Moongha Invaders: Mad Scientists and Atomic Monsters Attack the Earth! makes for one sweet mouthful.

Posted on December 24, 2015, in Board Game and tagged Board Games, Martin Wallace, Moongha Invaders, The Fruits of Kickstarter, Treefrog Games. Bookmark the permalink. 4 Comments.

← There’s Gold in Them Thar Hills
Lords of Waterdice →