More Than Just a Theory

Look, we’re all grownups here. By now it’s obvious that the theory of evolution is a hoax. Just like dinosaur bones and Plaid Hat Games being sold to F2Z Entertainment, it’s there to test our steadfastness. So yeah, maybe I was tempted into agnosticism when Evolution appeared at my doorstep, box buckling under the pressure of a thousand demons and belting passages from The Communist Manifesto at the top of its lungs. It took a lot of soul-searching before I came to the realization that I’ve survived dozens of Tolkienist fantasies brimming with wizards and talking trees. Why not give a Darwinist fantasy a shot?

Long story short, I’m happy I did, because Evolution is easily one of the best card games of the year.

My species love their hard shells.

We spend a lot of time talking about “theme” in games, the idea that some titles do a better job than others of merging their gameplay and their fiction. While there’s really no replacing a solid set of rules, compelling settings and themes can go a long way towards explaining the what and why. At their best, themes can make us forget that we’re really just manipulating an abstract piece of machinery; instead, we’re fighting a war, or sending people off to do our bidding, or firing clay into amphorae for our medieval lord. Though perhaps not that last one.

Well, by far the coolest thing about Evolution is that it completely nails its theme. The theory of evolution, which argues that successive generations of biological species give rise to new heritable traits, and that those traits go on to determine whether a species flourishes or goes extinct, is exactly what this game is about. And hoo boy, this game nails it. Half an hour after you’ve sat down with your first featureless vole, totally bland and tiny and scraping by with a minuscule population, Evolution stops being about discarding cards and moving wooden cubes up a track. Instead, it’s about your voles evolving long necks so they can eat food that’s out of the other animals’ reach, their body size growing until they’re safe from most predators, and their population booming.

And then, maybe, the situation changes and so does the game. Now it’s about how the food started running out and your population withered from hunger, or a pack-hunting predator drove them towards extinction. From there, it’s anybody’s guess. Will your species evolve a different means of staying alive, herding together for safety or climbing out of the predator’s reach? Will they burrow beneath the ground to hide or grow horns to fight back? Will they become fertile and breed until a few missing sick and elderly won’t cause much long-term harm? There are loads of possibilities, each species running as fast as it can just to stay in the same place. 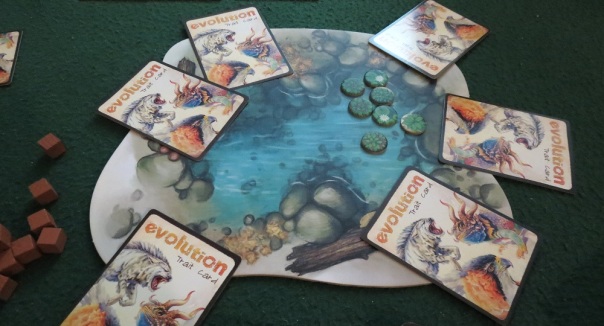 Life down at the watering hole.

Now, you might be thinking that all these possibilities are only, ahem, possible because the game is complicated.

Here’s the thing: Evolution is so beautifully simple. For its depth, the shortness and clarity of the rules is almost laughable. See, each of these traits that you can give your creatures, cool things like turning into a carnivore or cooperating with other species or becoming a scavenger, are printed right onto the cards. There are around fifteen unique possibilities. That’s hardly any at all. But because each species can have up to three traits, by the end of the game you’ll have a dozen fully-realized creatures on the table, each doing something entirely different.

Consider the carnivore. Most creatures are herbivores, relying on the whims of the watering hole to provide sufficient food. The problem is that while plants are plentiful early on, once each player has two or three species, it gets a lot harder to fill all those bellies, or gizzards or whatnot. Not so for the proud carnivore! These creatures have developed a taste for blood and can’t eat plant matter at all. Instead, they attack other species, decreasing their population (even possibly making them go extinct) and gaining food equal to the body size of their prey. That means they can gain a whole bunch of food very quickly.

However, this doesn’t mean that life is all roses for the carnivore. For one thing, most species spend their entire lives in the pursuit of life, liberty, and not being eaten. So if your traditional mid-morning snack suddenly evolves the ability to climb trees, unless your carnivore follows suit, it will go hungry. Or maybe your prey starts riding atop the backs of a larger species, and since a carnivore can only attack animals that are smaller in body size, it will go hungry. Or perhaps snacko decides to hang around a species that lets out a warning call; now your carnivores will have to evolve the ambush trait, otherwise — you guessed it — they go hungry.

The point is, being a carnivore is a high-risk high-reward proposition. If their source of food figures out a way to avoid being eaten, a carnivorous species might go extinct overnight. Then again, a carnivore doesn’t have to rely on the fickle watering hole at all. The fact that you’re also literally eating your opponent’s points and forcing them to adapt to your creature is just a perk.

One more example. Of all the traits, perhaps the rarest is intelligence. A select few species will gain this trait, and it completely transforms how they operate. Whether herbivore or carnivore, once a species is intelligent it gains some really nice perks, representing their use of ingenuity and tools to brute-force their way past nature’s limitations. An herbivore, for example, can take extra food, chowing down from the watering hole before the salad runs out. A carnivore, on the other hand, can ignore a single trait when it attacks another creature. Climbing a tree isn’t such a great defense when your pursuer can whittle a ladder. Or throw rocks. Whatever. The trade-off is that in both cases you have to discard a card from your hand, giving you fewer options for evolving your species. Being smart means planning ahead, after all.

Intelligent species can use tools to gather food or catch prey.

Speaking of smarts, Evolution is bristling with the stuff. There are a staggering number of ways to customize each species, from sex-crazed shelled foragers to scavengers who stockpile energy in their blubber. You can create an impregnable trio of herbivores who cooperate and give each other warning calls, or dangerous predators who shape the design of every single species thereafter. Just the other day, my first hand let me create a climbing carnivore who hunted as a pack. Ofttimes the climbing trait is one of the best early-game deterrents for predators, but since it was useless here, other species were forced to get creative, eating quickly and then burrowing beneath the ground or fending me off with horns. I even managed to wipe out a pesky intelligent species before they learned how to poke me with sharpened sticks.

The point is, Evolution is brilliant, and it hardly requires any rules overhead to get there. This is easily one of the best card games of the year, and missing out on it is the geek equivalent of evolving into a fat slow species that secretes maple syrup and wears bright plumage for attracting the carnivores over for supper.

Posted on September 6, 2015, in Board Game and tagged Board Games, Evolution, North Star Games, The Fruits of Kickstarter. Bookmark the permalink. 9 Comments.