The Art of Victory, I Presume

We’ve all been there before. You want to play a game, but judging by the clock, you’ve got exactly one hour before your attentions are needed elsewhere. Not fifty minutes, not an hour and twenty. One hour.

Thank goodness then that Ars Victor is the one-hour wargame. There are no others. None.

Okay, leaving aside the harping on its faintly silly self-appointed subtitle, let’s talk about why Ars Victor might actually be a contender for what you play when you’ve only got an hour. 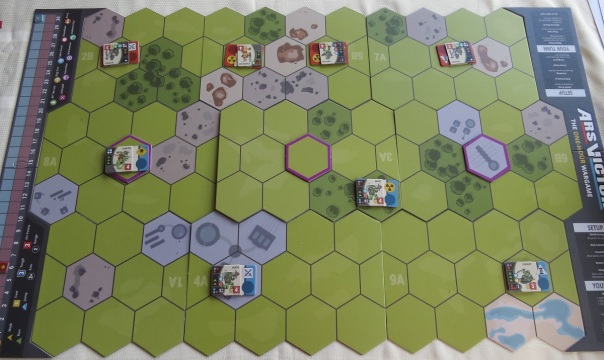 At first glance Ars Victor bears passing resemblance to some of the Commands & Colors games — something like Memoir ’44, Battle Cry, or the Second Edition of BattleLore (which we reviewed last year) — but with more cartoony art. A hex battlefield that appears spread over three “flanks,” special zones to capture and hold, points for killing enemy troops, and a card-driven system for delivering orders to your units all seem to solidify the comparison; which, for the record, would be a positive parallel, if Ars Victor didn’t have such a high possibility of being another half-baked Kickstarter game. Because let’s be honest, it totally could be.

The thing is, as with the game’s art, Ars Victor grows on you. And not in the stray-puppy sort of way. More in the lost-orphan-who-turns-out-to-be-a-genius-and-also-a-kindhearted-prince sort of way. Which is a thing, right? 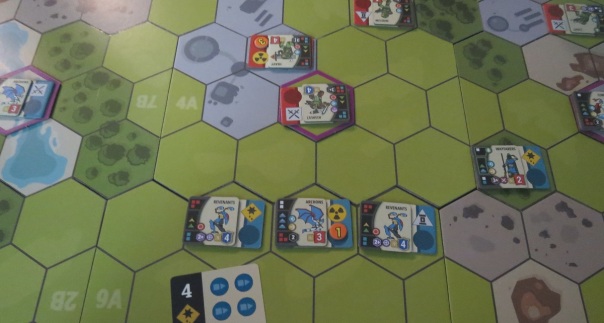 Okay, the point I’m struggling to make is that Ars Victor comports itself with such confidence that it doesn’t feel like a Kickstarter game.

For example, consider setup. Since Ars Victor wants you to squeeze in a game from setup to breakdown in sixty minutes, one might expect the setup to be oversimplified and brisk, with very few important choices on display. Instead, it’s one more facet of the game, with both players “scouting” the terrain to create a unique map, and mustering an army with one of the best point-allocation systems I’ve played in recent memory. The coolest part is that you’ve got 80 points to scrape together an army, but chances are you’re only going to use maybe 50 of those points.

See, the game is won by forcing your opponent’s “glory” down to zero. It trickles away whenever you control a capture point at the start of your turn or kill an enemy unit. The trick is that your starting glory is determined by your leftover mustering points, so while it’s possible to smash together a massive army with all the best artillery and assault warriors and overweight elite infantry (literally), chances are you’ll start the game with 14 glory and get knocked out after only a handful of rounds. So even before the game begins, you’re engaged in this really compelling balancing act between the best soldiery and a healthy glory stockpile for once the bullets start flying.

Your army will usually feel a bit slim at first, though after a few turns it won’t matter because the game is so fine-tuned for having nine or eleven units. You’ll start with four guys on the board as your “vanguard,” then some in reserve, including one HQ unit. This guy — which you assign, so your HQ could be a howitzer or a mobile unit of spearmen mounted on velociraptors — is critical, because you bleed glory points whenever your opponent has an HQ on the board and you don’t, whether your HQ died or just stayed home like a coward. Better yet, if you can get your HQ onto one of the board’s three capture points, your opponent will lose double glory, which is always a tantalizing opportunity for risk-takers.

The units in the Empire of Man army.

Once you’ve got everyone on the board, the command system shines. Unlike the C&C system, where you activate units in one of three “flanks” at a time, here you can activate guys all over the map, though the system still encourages you to alternate units and make hard tactical choices.

When you place units on the board, you assign them a banner, which comes in one of four suits and one of two colors (silver or gold). Each command card shows one such color/suit pairing, letting you activate units of that suit for a normal action cost, or units of the same color but different suit for one extra order token. You can’t order units with a differently-colored banner at all. It’s a clever system that emphasizes a balanced force and lets some units move over and over, at least until you run out of cards for that suit/color and they have to take a breather for a few rounds. It forces you to decide whether to spread out your forces, with a few of each banner here and there, or put a bunch in one place for the occasional overpowering turn in one sector.

Even the units themselves are interesting in all the right ways! They have pronounced strengths and weaknesses, the least of which is that they roll different strengths of dice in melee and ranged combat. So a Field Gun can fire and with devastating effect, but the less-impressive Mortar can lob its lighter shells over obstructing terrain. Dino-riding Lancers are absurdly quick and great for taking capture points early, while tubby Brutes waddle around but almost never take hits. Light infantry might not seem as sexy as Medium or especially Heavy infantry, especially with the latter’s super-extended range when he doesn’t move that turn, but they’re snipers whose dice stay powerful when shooting into cover, making them great at picking off distant enemies. And those are just the troops from the Empire of Man, let alone the high-mobility jump troops of the Ancient Hegemony. 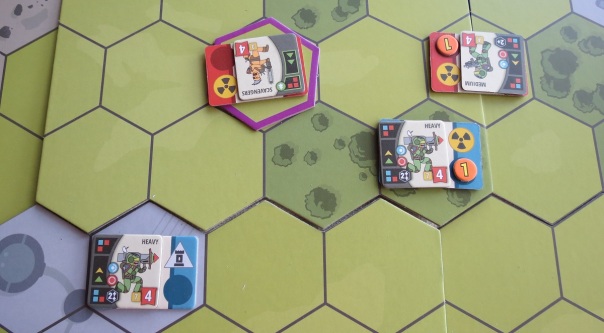 My heavies love their job.

Units are also chunkier than in many other hex wargames, mostly because so many of them give you a lot of player agency over when they take wounds. Anyone with a “take cover” ability, for example, can retreat one space to block a wound, while “standfast” units can take hits instead of falling back and “bug out” units can just run away before the fighting starts at all. It’s a fun system that often offers options rather than leaving you 100% at the mercy of the dice gods. I’ve seen a few games where only two or three units died over the course of an entire match, seizing capture points and getting caught up in a couple skirmishes and eventually retreating and getting replaced by fresh troops rather than dying and losing precious glory points. This turns the battlefield into a give-and-take affair — and, if you’re clever, opens up a good reason to send flanking units behind enemy lines to exterminate weakened troops.

Even the art itself is so damn cheerful that I can’t help but appreciate how Ars Victor doesn’t even try to imitate the everything is grim and dark and nobody smiles unless they’re sadist berserkers thing that so many other battle games try to do with their artwork. Here, the Medium infantry have this goofball grimace, and the Heavies have a Christmas Morning grin, courtesy of their bazooka. Because anyone would smile like that with a bazooka.

Best of all, it really takes about an hour. Setup to breakdown. Army recruitment, building a unique scenario, and having a hell of a lot of fun battering some enemy soldiers, all in one hour.

Okay, scratch that, because the “best of all” is that Ars Victor is fun, and appreciably polished for a Kickstarter game — but the “takes an hour” thing is still pretty great.

Posted on September 13, 2014, in Board Game and tagged Ars Victor, Board Games, The Fruits of Kickstarter, Trip West Games. Bookmark the permalink. 10 Comments.