← Is That a Province in Your Pocket?
Big Ogre, Little Ogre →

It should already be apparent that I’m a huge fan of Volko Ruhnke’s COIN Series. It even led to the formation of my gaming group’s “COIN Collecting Club,” which is our way of code-talking that we’re going to play COIN games all Saturday afternoon. See, the real genius lies in the fact that certain people at our regular game night think it’s a club for the collecting of metal currency, when really we’re betraying each other and occasionally getting pissed about it.

To those certain people, who I’m aware read this site: I apologize. It couldn’t be helped. We just really didn’t want to play with you more than once a week.

Anyway, the COIN Series has already taken us on a tour of drug-war ’90s Colombia and Revolutionary Cuba, and today we’re talking about its headiest subject matter yet: the still-ongoing war in Afghanistan.

In more ways than one, A Distant Plain represents a certain serious-ification of the COIN Series. I wouldn’t call it a “growing up” because this has always been a very grown-up set of games, but it’s right there for everyone to see: the map is drawn in shades of brown, brown, and tan, robbed of the Spanish-speaking jungles that provided safe haven for the guerrillas of the first pair of games. The wild Clear and Present Danger-ousness of Andean Abyss and the rum-soaked Godfather II audacity of Cuba Libre have been stripped out. Perhaps most crucially, gone is the clear vision of hindsight, replaced with a more apprehensive setting, a misunderstood and ongoing war whose outcome is still uncertain. It imbues the proceedings with a sort of sobriety; there are fewer jokes, not quite as many funny accents.

Well, sometimes accents. But we feel bad about them.

Either way, this is a board game that has something to say, if only about the sense of futility that permeates any conflict in Afghanistan. Not that all this high-concept stuff is going to get in the way of the actual game, because as we’ve come to expect from the COIN Series, A Distant Plain does a bang-up job of getting four good friends to stop trusting each other for a few hours.

The Coalition and Afghan Government attempt to push the Taliban back into Pakistan.

As with the previous two entries in the series, there are four factions, though this time two of them are shackled together.

The first is the new Afghan Government, recently placed into power by their Coalition allies. They’re the classic government faction, armed with standing armies and a significant police force, and they’ve got a good idea of how they intend to control a country as historically disputed as Afghanistan. To their way of thinking, the best way to maintain power is by securing the patronage of the power brokers and landowners that run much of the country, which they’ll do largely by funneling foreign aid money in a way that undoubtedly looks like corruption. And who could blame their aid-givers’ irritation when the Government is beset by so much actual corruption, whether in the form of mass desertion, the suborning influence of the Warlords, or Taliban infiltration into their ranks. The Government is not only beset on all sides, but also from within.

So thank goodness they’re allied with the Coalition! — except for the tiny detail that the Coalition is bent on pursuing their own goals. For one thing, they don’t interpret the source of Afghan power in the same way as the Government, making their goal an interesting combination of the idealistic, as they work to change the hearts and minds of the locals to support their cause, and the expedient, as they try to minimize their casualties and eventually exit the country the instant it’s ready to be left to its own devices. This difference in goals is already a strain on their relationship with their Afghan allies, and it only gets worse when they start using the local military to shield their own troops from demoralizing casualties and the ensuing PR muck-ups, or draining local resources to pay for their Taliban-hunting operations, or continually undermining the Government’s efforts to secure patronage.

Hence, it’s more an alliance of necessity than one of real affection, two suspicious fellows trapped in a lifeboat surrounded by hungry sharks, and whoever wins… well, they leave the other one behind. “Good luck!” they say, “and thanks for distracting the sharks!” As highly interdependent as they are, they’re always on the lookout for ways to undermine one another. 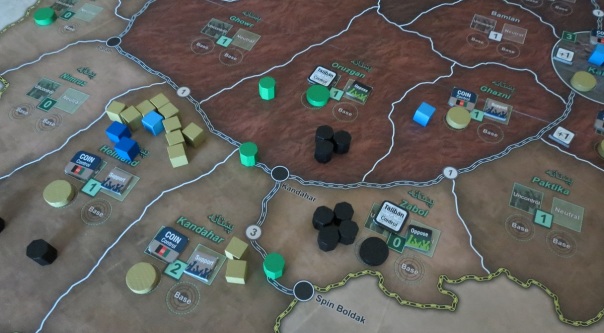 The Taliban and Warlords maintain their foothold.

The inability of the Afghan Government and the Coalition to work together is what allows the other two factions to operate with some degree of impunity.

The Taliban takes on the role of the primary “antagonist,” so to speak. They’re slippery, creeping into territories unseen and refusing to engage in direct combat. They love to terrorize things, whether scaring the populace into bending to their will or by blowing up crucial infrastructure like highways. They extort money, infiltrate the army and police, and they’re never really quite beatable. Unlike their FARC and 26th July Movement predecessors from Andean Abyss and Cuba Libre, they’re also connected to the land by deep ethnic roots, which lets them recruit throughout the southern half of the country even when they’ve been successfully beaten back. Perhaps most interestingly, they’re also constantly currying favor in Pakistan, begging for the Coalition to airstrike their bases on foreign soil because it pisses off Islamabad something royal, which in turn lets them recruit and move along the border without harassment.

And then there are the Warlords, the neutral faction that’s mostly defined by how little they like anybody. They’re sort of like the Cartels from Andean Abyss and the Syndicate from Cuba Libre, focused on making money, money, and more money — though here they don’t trade wads of cash or drug shipments for favor. In this case, the Warlords also want the country under nobody’s control in particular, so they take on the role of destabilizing agent, enemy to whosoever is winning at that moment. When the Taliban is riding high, they protect the highways for cash, suborn their troops, and stay out of the Coalition’s way. When the Government is doing well, they conduct terror actions of their own and refuse to feed patronage to Kabul. They are, in short, big jerks.

Just a few of the many, many action cards.

The interconnectedness between factions has always been high in the COIN Series, but in A Distant Plain it’s higher than ever. For instance, the Warlords can generate patronage for the Government or money for the Taliban when they traffic their “product” (cheap plastic umbrellas that inevitably blow upwards in a hard wind, or so they told our customs agents), so expect to see army troops and guerrillas leeching off their bases at all times. Even more inter-reliant are the Government and Coalition, whose monstrous bureaucracy forces them together. As with all games in the COIN Series, there are plenty of diplomatic discussions going on, usually revolving around the Warlord player. Can you bribe him into protecting your highways and pushing into the south to undermine the Taliban, or will the enemy convince him to make noise up north and force your troops to desert? Can’t you see they’re winning! Do you want to lose?

While the map itself is simpler, with no forest spaces and only one actual city (unlike the handful in Cuba Libre or the many in Andean Abyss), A Distant Plain is the most complex entry in the series yet, and often the longest, though there are a few different scenarios that let you determine approximately how long your game will take. My least-favorite change is found in the way the factions align, especially since the Government and Coalition are so awkwardly thrust together — I recognize that’s the point, but it just isn’t as fun as the Colombian Government’s constant mutual paranoia with their semi-allied AUC, wondering when they’ll betray each other, or the four-way conflicts of the other two games in general. Here, there’s little choice but for the Government and Coalition to play it relatively close, at least unless they’re interested in a rejuvenated Taliban government in Afghanistan.

What on earth are you doing up there, Government?

However, this isn’t meant to be a game-breaking complaint. I’d be disappointed if A Distant Plain pulled the same tricks as its predecessors, especially with a system as malleable as COIN at its disposal. This is an entirely new game, complete with interesting factional dynamics and an appropriately bleak setting.

Which is to say, while A Distant Plain isn’t quite my favorite entry in the COIN Series, it still makes noteworthy use of one of the most compelling game systems out there. More than in most games, I remember its subtle turns, its betrayals, how badly Geoff played the Warlords at first until he settled into a great economy that fed patronage to my Government and made me leave him alone for fear of him cutting off the free lunch. What a d-word.

As for the question of whether you should check out A Distant Plain, I’d argue it comes down to whether you’re already a fan of the COIN Series. It’s definitely worth a look if you’ve already played its first two entries, but I stand by my original assessment: start with Cuba Libre, graduate to Andean Abyss, and make the jump to this one once you’re ready for a new challenge.

Posted on July 22, 2014, in Board Game and tagged A Distant Plain, Board Games, COIN Series, GMT Games, Why Games Matter. Bookmark the permalink. 14 Comments.

← Is That a Province in Your Pocket?
Big Ogre, Little Ogre →