Red Nile: Lords of the Sand 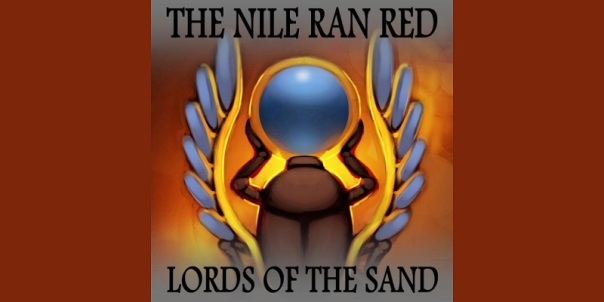 What’s the first thing that springs to mind when I say “The Nile Ran Red”?

If it’s the story of Moses, then you’re on the same tangent as all my friends. Upon hearing about Small Box Games’ most recent collection (which happens to be entitled “The Nile Ran Red,” in case you hadn’t pieced that together), every single one of them said, “So it’s a game about Moses?” Then they laughed at me, because despite my degrees in history and religious studies with an emphasis on Biblical texts, that thought never once occurred to me, and it really should have. One day, all that education will come in handy! But apparently not today.

Anyway, aside from being decidedly un-Biblical, The Nile Ran Red is actually three separate games, and we’re investigating them one at a time — starting with Lords of the Sand.

Everything used in Lords of the Sand (including four copies of each unit card).

At its heart, Lords of the Sand is very much like many of Small Box Games’ other small-box games. Which is to say, it would love for you to fuss over your cards’ multiple uses, a mechanism that has long been SBG’s bread and butter. Players are each placed in control of one of four gods — Anubis, Khnum, Sobek, and Thoth (listed alphabetically so as to not show any undue bias) — and then tasked with managing a hand of unit cards in an attempt to complement that god’s unique style.

Each unit can be used in one of three major ways. You can assign them as a leader, where they’ll generate the resources you need to purchase your other units. This can be tricky, since there are four resource types and each leader can only generate two, so it’s crucial to anticipate both the needs of the current turn and any future purchases. The second option is to deploy units into your “court,” where they’ll provide points at the end of the game based on their allegiance and unit type. More immediately, a full court and leader slot will get you an obelisk at the end of each turn, and since obelisks are one of the surest sources of points in the game, you’ll probably want to do that. Y’know, if you’re interested in winning. Lastly, any unit can be discarded to activate its special ability. There are tons of these, from jerk options like destroying units or obelisks to economic boosts that let you draw cards or play units to your court and use their ability. All sorts of powerful stuff.

Lords of the Sand is about carefully assembling a tiny tableau out of these units, though it isn’t as straightforward as most tableau-building games. One of its neatest tricks is that each of the gods play very differently from one another. Some of their abilities are nearly identical; for instance, each god gets to play one of its allied unit cards for free each turn, so Sobek gets to play a free Sobek unit each turn, while Thoth can play — you guessed it — a Thoth unit. But for the most part, each god is wildly different. 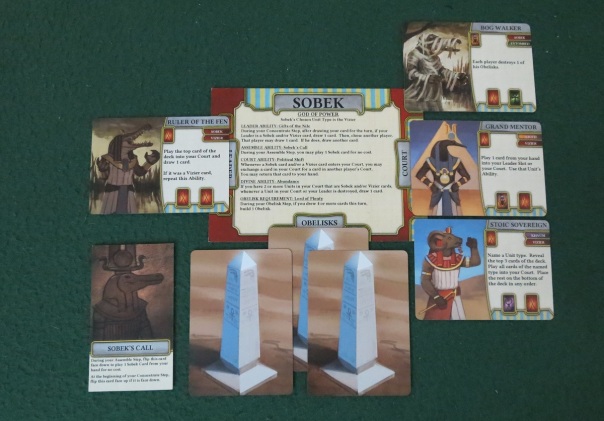 Assembling a court and building some obelisks.

Consider Khnum, god of war. He’s all about killing things, as gods of war are wont to do. When friendly units enter his court, they destroy enemy units. Even cooler, his “Sandy Portent” ability lets him reveal extra cards when prompted by a unit ability, improving some of his options significantly. One such badass option is the Border Raider, who reveals three cards from the top of the deck and kills an enemy unit for each soldier card that comes up. With Sandy Portent, now you’re revealing five cards, and your chances of wrecking somebody’s court just got a lot more impressive. And all this killing isn’t just for show. Khnum builds an obelisk at the end of his turn if he’s destroyed at least two units, so you’re constantly encouraged to rain hell down on your enemies.

And that’s just one god. Sobek lets you draw tons of cards, Thoth likes to play a bunch of unit abilities, and Anubis tries to move cards into and out of the discard pile.

However, while the uniqueness of these gods is one of the niftiest things about Lords of the Sand, each god’s multiple distinct abilities can be difficult to track, and give the phase order quite a bit of importance. This gives the learning curve a surprisingly steep grade for such a light game. The difficulty is compounded by the reference cards being printed onto the back of the god cards, so if you’re playing with a full four players, you can either have your god’s unique abilities or the phase reference face-up. Never both.

These complaints make Lords of the Sand somewhat tricky to learn, but they’re nothing compared to the game’s real problem, which is that it encourages a shocking downtime between turns. Since the entire point of the game is to figure out a way to spin your two or three actions into five or six plus as many obelisks as possible, it’s common to take a very, very long time ensuring the best possible move. The order of play, right down to when you generate your resources and when to play your god’s free unit, is absolutely crucial and rarely obvious. And while this encourages you to master the system — and in most cases, the winner will be the one who played most cleverly, not the one who got luckiest — it still makes for one hell of a longer game than you’d expect. 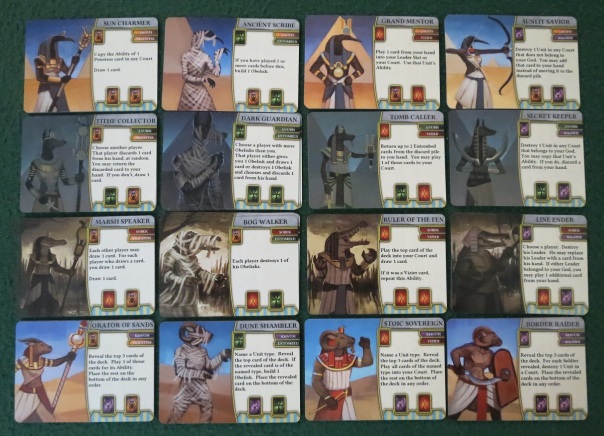 I love the way the animal and class types align.

Then again, I’m a big fan of games that encourage deliberate play and multiple ways to employ each card, so it would be disingenuous if I didn’t mention that I enjoyed Lords of the Sand quite a bit. It was somewhat polarizing among my friends, some of whom loved it while others found it too slow or the phase order and powers too intricate, and I suspect that’s how it’ll be received at large.

Still, there are so many little things to like about it. While I prefer the speed of the two-player game, I really enjoy how a full complement of four players creates this internal system of checks and balances where some of the gods swap units into other players’ courts or kill their guys or discard their cards, and everybody has some individual way of affecting the course of everyone else’s plans. And I like how building enough obelisks triggers the end of the game but isn’t the final win condition, leaving everyone cautious about building too many until they can assure their victory. And I like the simplicity of the resource system and card allegiance stuff, and the cool art, and the way I can totally pull off a whole string of ridiculous actions if I time it right.

There’s a lot to like here, so long as the abundance of god powers and the downtime between turns don’t scare you off. It isn’t a perfect game by any stretch of the imagination, but it’s also a fine start for The Nile Ran Red.

Posted on June 24, 2014, in Board Game and tagged Board Games, Lords of the Sand, Small Box Games, The Fruits of Kickstarter, The Nile Ran Red. Bookmark the permalink. 10 Comments.