← The Library of Minigame Library Reviews
Phoenix Elves vs. Tundra Orcs, Round II → 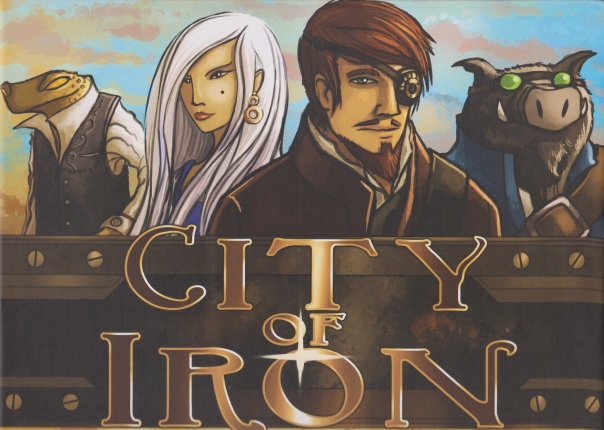 Looking at City of Iron for the first time is sort of like staring directly into a rainbow, which my father always said would burn my corneas. Or was that the sun? Either way, Ryan Laukat’s latest game appears all but incomprehensible at first glance, packed as it is with unique races, fantastic lands, and ample opportunities to corner the Bottled Demon market. It’s easily his most ambitious title yet. Is it also his best? Let’s take a look. 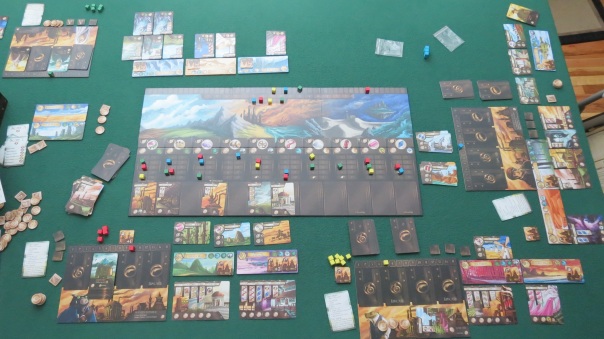 A regular game of City of Iron.

What Is City of Iron?

The long version is that it’s a race between up to four young nations to acquire the best leaders, generals, inventors, and magicians; to explore, colonize, or conquer distant lands and towns; to balance civic, military, and economic needs by expanding your cities with all sorts of buildings, from academies and barracks to docks, factories, srika pastures, chowder houses, and more; and to corner markets for exotic resources like magic gems, tentacles, newfangled machine parts, and glow moss. Each nation brings its own advantages, like the Hogmen Republic’s strong starting hand to the Cresarian Scholars’ extensive powers of academia, the Toad Inventors’ bullying of the game’s bid system, or the boring old humans and their boring old mobile buildings. At the conclusion of three broad eras of technological and magical development, the most successful nation rises ascendant, while the others fade into footnotes.

Put more simply: it’s the only game in existence that will make you scream at your best friend, “You son of a bitch, you took my turnips!” 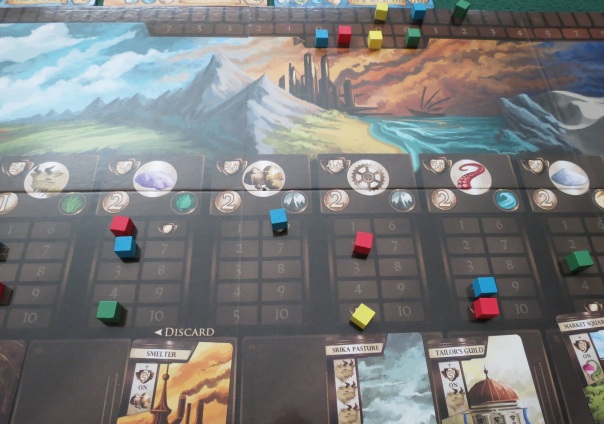 City of Iron Is So Familiar, It’s like Coming Home

Nah, I’m just making up crap to put on the section header. Still, it feels pretty darn familiar right at first. Like many Euro-themed market games, most of the drama comes from who’s placing little colored cubes on which spaces, and the carefully-selected structures and occupied towns that make those little colored cubes move around. There are ten goods to compete over, each of which is more valuable than the one preceding it — so turnips, srika (shaggy yak creatures), and glow moss are a tier below ore, machine parts, and tentacles, which in turn aren’t as desirable as salt, bottled demons, silk, and magic gems — and nearly all of the opportunities for victory points are tied into these. There’s very little player interaction. Your options are regulated by two sets of cards that you deckbuild as the game progresses. As I said, it feels familiar.

The thing about City of Iron, though, is that it feels familiar right up until you realize all the little ways it’s not. And I’m not just talking about the fact that you’re deckbuilding two decks instead of one. 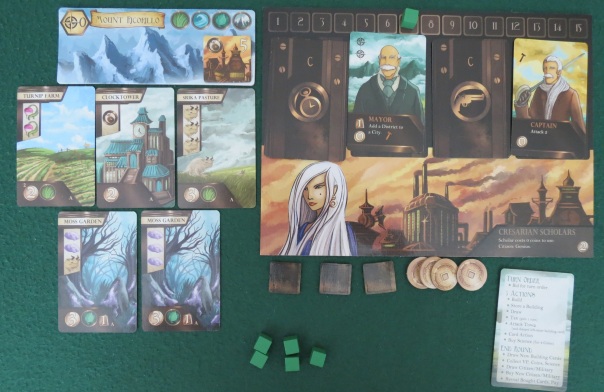 The Cresarian Scholars have filled up their home city.

There are five ways City of Iron surprised me by being different from your run-of-the-mill market-control game.

Since I’ve already brought it up, I might as well begin by talking about the deckbuilding part of the game. As I mentioned, City of Iron has you building two decks. The first is for your military: in addition to regular captains, soldiers, and sharpshooters, you’ve also got inventors who strip scientific advancement out of the towns you conquer, high-attack clockwork soldiers, tricksy spies, and warships. The second deck is for civics, filled with scholars who can forward your scientific progress, explorers for building cities in faraway lands, mayors for expanding the cities you’ve already filled up, tax collectors, merchants, and ships of both water- and air- varieties.

Rather than being a complication of the existing deckbuilding mechanic that we all know so well, separating the workings of your empire into two decks actually gives you quite a lot of control over the options unfolding on the table. For instance, let’s say your first city has reached its maximum of five buildings and you’re looking at ways to expand. You’d also prefer to expand to a place with a “floating island” symbol, because there are some buildings on offer that can only be built in cities that are on floating islands. You look down at your options, and see that the most obvious way would probably be to build up your citizen deck and play the explorer card, who lets you discard cards with the distance symbol until you reach a new land. Then you plop down a city on your sparkling new floating island, and voilà, you’re set.

On the other hand, you could use another citizen card, the mayor, to just expand the city you’ve already got. This process wouldn’t give you a floating island, but it would be a lot faster to just expand the borders of your original city rather than founding an entirely new one. You might not get the exact buildings you were looking at, but there’s little guarantee other players wouldn’t nab them before you were ready anyway.

Both of these options use your citizen deck, which is a problem because on previous turns you didn’t think ahead very well, and purchased a whole bunch of military cards instead. Then you notice that instead of waiting to build up more civic options, you could use all the military cards you’re holding to conquer the neutral town of Metgra. Metgra isn’t a floating island, but it is a tropical location that lets you erect two buildings. Which means you’d be the one and only player able to break into the lucrative silk market. And nobody at the table is going to dare to conquer that town out from under you, because you’re the one who splurged on the super-expensive Iron Dragon card for its high attack.

As I said, there’s a lot of player agency involved with this system — and I’ve only mentioned the first part of it. City of Iron’s deckbuilding has two other aspects that reinforce how much control you have over the goings-on of your empire. First, you get to look at your deck whenever you want, and you get to choose the order your cards are discarded in; and, when they’re put back into your draw pile, you don’t shuffle them. This means you not only always know your options, you’re also always aware of when they’re available. Second, instead of everyone purchasing their cards from a central deck, everyone has their own separate pool. These card offers are identical other than a couple minor faction-specific differences, so if you were annoyed that your wife filled her deck with ships to reach distant lands, you can go ahead and mimic her purchase next round. While this does eliminate some of the sense of discovery inherent to deckbuilders, it also gives you the ability to tailor your nation without worrying about the whims of a random card offer. 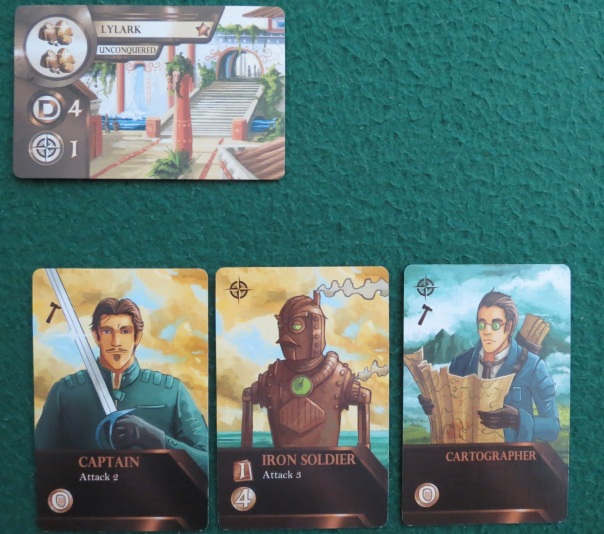 That’s just the first of a few ways that City of Iron sets itself apart. For the sake of time, we’re going to do a montage while we blaze through the last four. Feel free to hum “Gonna Fly Now” from Rocky. I know I am.

The market domination portion of the game relies more on regulating your opponents’ options than on memorizing optimal card combinations, and any market can become lucrative with the right investments — turnips look like a bad deal until you have a distillery giving you loads of cash and a market square for bonus victory points. All from lowly turnips. Seriously, turnips can win you the game while your opponents squabble over who gets to control the sexier commodities.

Not only is it supremely cool to conquer neutral towns, but conquering the towns your opponents have already occupied is sublime, and adds an extra way to screw any runaway leaders out of their ore monopoly. And if your military is looking puny, you can shift the focus of your nation to military matters and back again at any point — your options are flexible, and you’re never trapped into a single role thanks to the unique way City of Iron handles its deckbuilding.

Speaking of conquest, that initial Eurogame feel that there’s little player interaction soon disappears. There’s loads of player interaction, whether it’s the initial tense turn-order bid (going first and going last are both desirable for very different reasons, and can be yours for some extra cash) or racing to pick up the best buildings. You can screw your friends’ market standings, steal their towns, and play all sorts of mind games (“Nice, I finally have an army! What do you think of that, Geoff?”). And all this in addition to the regular player interaction of calling everyone bad names! 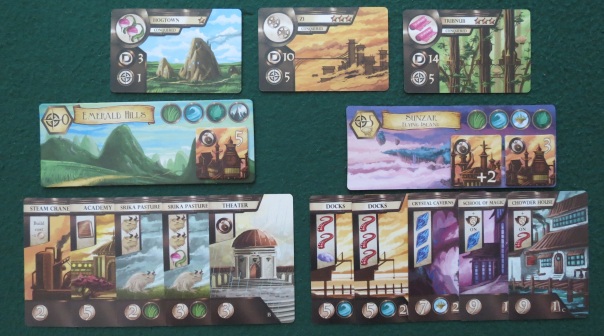 A regular near-endgame set of cities and conquered towns.

Lastly, City of Iron absolutely excels at forcing you to make the best of limited actions. As in, you get three of them per round, and while some are appropriately meaty — construction, invasions, certain card actions like exploration — others feel like turd-nuggets, total defeats, indications you’ve failed to manage your empire properly. Taxing your population for a single gold coin, for instance, makes you feel like you’ve misplaced a portion of your treasury. And that’s a good thing; there’s never enough time to finish everything you’d like to accomplish in a single game. You’re racing to nab the best buildings while also trying to manage your hand, tax your populace, learn science, and squirrel some gold away for card purchases at the end of the round.

A 2-player game takes only 90 minutes (70 is our record), with a little extra when you add in more players, and it’s easy to see why — City of Iron has an incredible sense of momentum. Unless you have a pack of Analysis Paralysoids at your table, but AP-prone folk could kill a co-ed game of Twister. 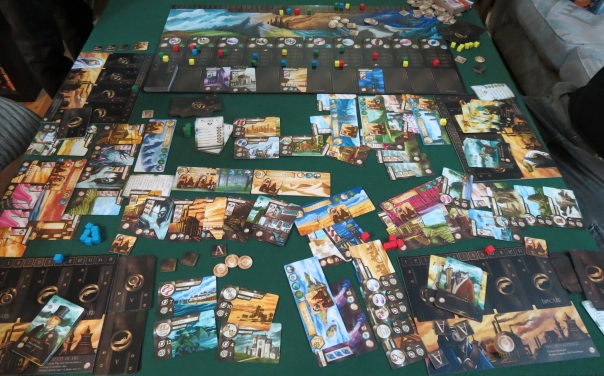 It can be a bit intimidating to clean up.

You want downsides, I got ’em. The cards are disappointingly flimsy given the high quality of the boards, the art is so good you’ll wish Ryan Laukat had bothered to give each card a unique illustration based on race (most of the cards get unique art based on which empire they’re from, so why they all didn’t is a mystery), and the cleanup is a beast. I mean, look at it. It’s horrific.

Here’s my final score: even with that overflowing toilet of a cleanup, I can’t keep away from City of Iron. And if that isn’t a recommendation, I don’t know what is.

Posted on May 8, 2013, in Board Game and tagged Board Games, City of Iron, Red Raven Games, Ryan Laukat, The Fruits of Kickstarter. Bookmark the permalink. 13 Comments.

← The Library of Minigame Library Reviews
Phoenix Elves vs. Tundra Orcs, Round II →