I wonder if, at any point during the promo period for Spec Ops: The Line, anyone at Yager Development mentioned the irony of marketing a game for its difficult moral quandaries when in fact it contains no moral quandaries. Oh, there’s some moral mugging. And some moral posturing. Maybe some half-baked moral messages. Alas, the quandary department is skint.

After the jump, I’ll explain why SO:TL, despite being an enjoyable experience, was ultimately a letdown.

The backstory: the once-glittering Dubai City has been drowned by sandstorms, and Colonel John Konrad (just to let you know that this will be a Heart of Darkness homage) has led his “Damned” 33rd Something Brigade into the city to help with evacuations. His private army went incommunicado and was presumed lost until a weak message broke through the storms that still rage in the desert surrounding the city. Cue Delta Force to the rescue, led by Captain Martin Walker. You are he.

So you walk into Dubai and discover that things aren’t as tidy as you would expect of a sand-flooded desperate-folk-filled cesspit. The locals are fighting a guerrilla war against the 33rd, who appear to be under the leadership of a sinister DJ, and what begins as a simple recon mission soon transforms into something deadly serious. As the plot progresses, the tone shifts from traditional rah-rah shoot-’em-up to psychological nightmare. If you’re dense, the visual cues of dirty uniforms, bloody scalps, and torn camelbacks will aid you in recognizing that your soldiers are going through hell.

And actually, that hell is pretty well realized. The visuals feel a touch dated at times, but Spec Ops has some breathtaking spectacles ready to distract the eye from the low-res textures. Nicely, the combat is perfectly competent, with a few niggles—sprinting feels like you’re an uncontrollable freight train, and when in cover you’ll see a perpetual “[SHIFT] VAULT” to remind you of one of your most basic actions (thank goodness the devs decided I didn’t need “W STRAIGHT A LEFT S BACK D RIGHT” up there the whole time). Oh, and the weapons sound more like airsoft toys than brutal death-machines. But other than that, the combat is fine. What it lacks in ingenuity, it makes up for by being smooth and intuitive. 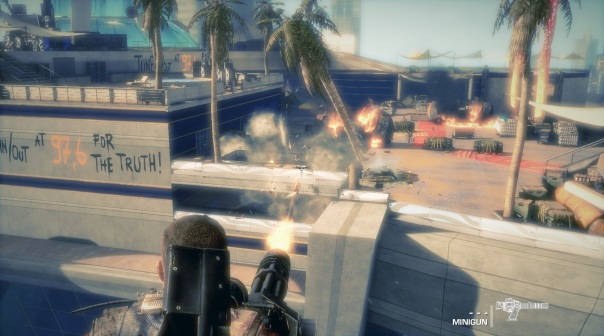 Okay, now I need to make a quick point. Spec Ops is competent, and I had fun playing it, but I’m still annoyed at my time spent in Dubai. This is because I’m at a point in my life where a game being fun or competent—or even good—is just not sufficient for me. We’re living in a time filled with plenty of fun and competent and good games, so I generally need an extra push to persuade me to put down money to play a game: a thought-provoking plot, an interesting open world, strong player interaction, emergent gameplay, innovative mechanics, etc.

I’m pointing this out for two reasons: first, if you’re interested in a fun, competent, and good third-person shooter, Spec Ops might be perfect for you and you might as well just ignore my old-man opinion; and second, I bought it because the marketing for the game made some impressive claims. This video, which features lead designer Cory Davis, does a good job of expressing why I hoped Spec Ops would be more than merely competent, including an interesting take on the elements (sandstorms disrupting combat, making huge piles of sand fall down on enemies, and shifting sands beneath your squad’s feet), and the importance of hard moral choices in the game. Now that I’ve actually played through Spec Ops, I might have rewatched that video and assumed it was talking about features that were planned for the game a couple years earlier in development but had been cut since, except that it was posted less than a week ago.

For instance, at 1:06 Mr Davis says that in Spec Ops “you’re quite often walking on what you perceive to be solid ground, but actually you may be walking on a dune that’s covering a 30-storey skyscraper.” He goes on to say that “during combat you have to be constantly thinking about where you’re standing and where you’re located, and you may even tumble through a skylight.”

Well, this statement just isn’t true. There are a few scripted moments (about three) where you’ll fall through sand, but I never once had to worry about falling into a sand trap, let alone constantly.

Taken alone, this is a small enough quibble. But the reason that I was most attracted to the game was the promise of moral greyness and actual moral choices. So let’s take a look at how those stack up.

To avoid being too long-winded, I’m going to limit myself to three examples. If you think you’re going to play Spec Ops, and you want to preserve your ignorance of the story, be warned that spoilers will follow.

The first is the example given in the above video, and is one of the few actual “moral choices” from the game: Your squad is traveling deeper into the city, and you’re currently playing along with the orders coming through your radio. You happen upon two people hanging by their hands from an overpass. Four snipers appear on the dunes above, aiming at the prisoners. You’re told that one is a civilian who was keeping water for himself, and the other is a soldier who was sent to apprehend him and in the process killed his family. You’re told to choose, to dole out justice.

Ignoring the lack of greyness in this morally grey choice, I played along. My first choice was to tell the voice on the radio to go screw himself, and to attack the snipers. So we killed them and proceeded down the road, where we were attacked by a horde of the snipers’ buddies. The event was never brought up again.

I assumed that this was the “good” outcome, so I reloaded to see what would happen if I chose differently. Turns out, nothing—whichever person you pick, you’re congratulated by the voice on the radio, and the snipers disappear. Your teammates berate you for making a hard choice, and down the road you’re still attacked by the exact same force. And every “moral choice” in the game follows the same pattern: a simplistic (and usually binary) option that resolves with someone shouting at you and then dropping it.

Second: Early on you see first-hand the horrors of white phosphorus, which kills its victims by burning them alive. A while later you come upon an enemy camp that blocks your route to your distant objective. The camp is chock-full of enemy troops, which means that discovering an unguarded and supremely-positioned white phosphorus mortar seems like a gift from above. One of your squaddies plays shoulder-devil and tells you to use it on the enemy, while the other grumbles a bit. If you go through with the attack, you’ll kill dozens of people who have no real hope of fighting back, and the attack will be brought up again and again throughout the game.

But the problem is that it’s entirely unavoidable. You cannot choose to rappel down to the camp and give your enemies a fair fight. You cannot choose to take an extra hour to trudge the long way around. You cannot fire the phosphorus nearby to scare them off. You cannot do anything but fire a load of incendiary material at an enemy camp. And that makes it feel incredibly cheap, since it’s the “choice” that you are most indicted for, but it’s the one prominent choice that you aren’t permitted to actually choose.

And third: in that same video, Mr Davis says at 2:23 that battles rarely end when “all the enemies are dead. They’re typically laying on the battlefield bleeding out in horrific pain and agony. The player can choose to react to that in a number of ways, and one of the ways he can do that is by… executing those enemies.”

Spec Ops draws attention to the horrors of war by showing your defeated enemies crawling around and crying for help. I hoped that this was potential for morality arising from game mechanics, even if it would be simplistic, and the lead developer’s statement that you could react in a “number of ways” strengthened this hope. But this is another unrealized claim. There’s no option to give water and morphine to the survivors, or interrogate them for information, or flick them a shiny coin—in fact, saying that you can respond to the wounded in a “number of ways” is like saying that Reese’s Pieces come in a variety of colors, and that’s a pretty limited comparison because there are more colors of Reese’s Pieces than “number of ways” on display: in actuality, you either perform a brutal execution, often depicting your character beating the man to death with his gun or bare hands (and get some bonus ammo that you apparently can’t lift off a corpse); or you ignore them.

“The horror” Captain Walker whispered when he saw the list of enemy dead. “The horror!”

Anyway, the final score is a giant yawn that echoes through a lonely cavern that you were told contained crystal formations but is actually just a big cave. If you’re interested in a suitable third-person shooter with a bigger mouth than heart or brains, Spec Ops: The Line is a solid pick. If, on the other hand, you’ve been watching the marketing, and you’re enticed by the promise of moral choices and greyness, you should be comforted that you’re actually witnessing moral greyness, and you can save your sixty bucks.